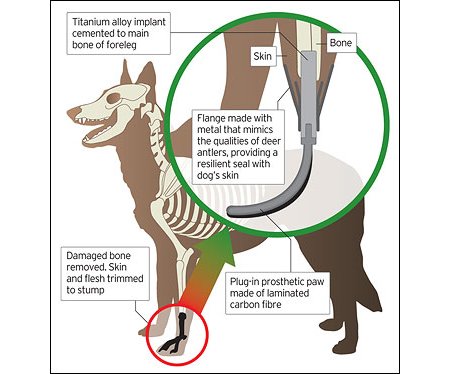 We have all heard about prosthetics for humans and how it has helped those who have lost their limbs to achieve a newfound level of independence. In fact, bionic arms and legs have come a long way from being a useless piece of plastic, and are now capable of movement as well as handle what we take for granted everyday such as holding pressure and using just the right amount of strength in our grips. Prosthetics for animals, however, is relatively unheard of but we now have a Belgian Shepherd dog called Storm that has the honor of being the first pet in the world to be fitted with a prosthetic paw.

This operation could prove to be an important milestone for us humans, considering how the false limb works – it allows the dog’s skin to grow into the metal itself. I do have my reservations about have my skin grow onto a foreign object, and should the limb not be fastened onto my bones other than via my skin, the thought of having it ripped away (accidentally or otherwise) sounds too painful to entertain. How did Storm get into the position he is in today? He first had his leg amputated earlier this year when it became infected with an aggressive tumor, where leaving it inside would prove detrimental to Storm’s health in the long run.

This special operation was performed by Noel Fitzpatrick, a veterinary surgeon who’s based in Farnham, Surrey and is well known for repairing the damaged limbs of pets. According to Mr. Fitzpatrick, this false limb has been implanted into the radius of Storm’s forearm (or should I say, forepaw?), and will be used as a model for human amputees down the road. It is hoped that the pioneering operation will be able to benefit victims of the July 7 bombings as well as soldiers who have completed their tour of duty in Iraq. I find this very interesting, and could this mean there will be many more people walking among us with prosthetic limbs that are by far stronger than what our natural arms could ever achieve?