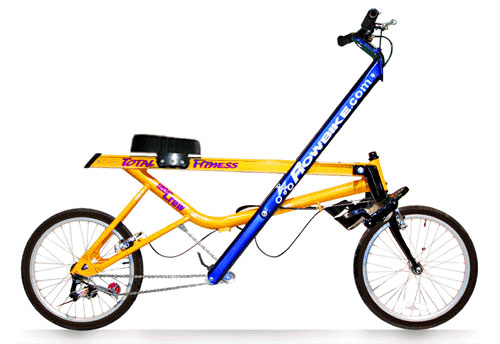 Here’s a really interesting way to get a great workout. One of the most effective ways of working out is by rowing, making machines such as the Bow Flex very popular. Most rowing, (aside from actual rowing, of course), however, you’re either stuck in your basement or at some gym.

The Rowbike is perfect for anyone who likes to get out while exercising, however still wants to get the most effective workout for the amount of time they can put into it. You can become fit and slim as well as lowering your blood pressure and gaining a higher metabolism all very easily with this exercise gadget.

What I like the most about it is how fun it looks. It’s like a bike except instead of the chain being pulled by pedals it is pulled by a rowing bar with your arms so you can get not only a great upper body workout as well as a great workout for your legs.

What also makes it great is that your energy isn’t just being wasted when you are rowing. All of your rowing power is put right back into propelling you forward which gives you an extra incentive to keep going.

Scientists agree that rowing is in the top three forms of exercise (also including cross-country skiing and swimming) and if you’ve ever tried real-life rowing then you would understand why. You use most of the muscles you want to exercise during a session of rowing so it also allows you to just have to have one exercise machine.

If you want to start a more fun and productive workout routine, you can order a Rowbike from Rowbike starting at $675.