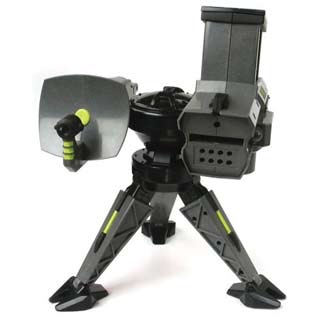 This is a great toy from Gadget Box.

Called the Room Defender, you install it in your bedroom or any other place where you don’t want prying eyes. Aim it at the door, and it waits patiently, automatically detecting any movements. When it does detect an unwanted intruder, it launches a salvo of 16 foam disks.

The Room defender is capable of operating in 4 different modes:

In an amazing scene that was cut from the original film, the TL9 systems wreak havoc amongst the 100’s of incoming aliens. One of the guns overheats and fails, and the others are down to their last few bullets. Ripley and Hicks prepare themselves for the worst – but then the aliens suddenly, and mysteriously, all retreat.

It’s a great moment in one of my favourite films, and having one of these Room Defenders, would always remind me of it.

I’m sure my two brothers, who are as smart as any alien bug and were always trying to sneak into my bedroom, would quickly figure out that this thing couldn’t hurt them. But at £24 the Room Defender is still a lot of fun. The Room Defender product page.