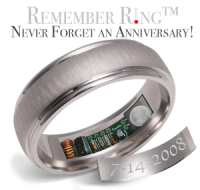 One of the worst things, if not the worst, a husband can do is forget his own anniversary. You will never forget to get flowers or some jewelry with your Remember Ring.

It looks like a standard ring, nothing special. But inside, there’s a heating element that will start to heat up when it’s about 24 hours to the special day. The temperature starts at 120 F and keeps getting warmer every hour from there.

The heat isn’t constant, though, it only last for ten seconds. That’s enough to cause discomfort, which is better than getting ignored for a week or two, but not enough to be really painful.

There’s no need for batteries, either. The micro thermopile converts the heat from your hand into electricity which will keep your battery charged and the microchip clock running constantly.

Although these rings aren’t yet available, when they are, it’s going to be in sizes 10 – 13, and you can get all the usual styles.

There’s no word on pricing, but if it means not forgetting your anniversary, and avoiding some trouble, it’s definitely worth a lot for most men. Check out the Remember Ring site here.