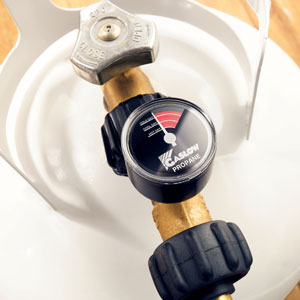 You’ve probably had this oh so terrible problem happen to you. It goes like this, you go out to the grill, perfectly shaped, sized, and spiced hamburgers in hand and try to start the grill only to find out you’re out of gas. Now, instead of one damn tasty hamburger, you get a broiled, mediocre/sub-par burger that’s probably half cooked. Some grills have those little levers or gauges that tell you how much gas is left. Mine does, but when the gas tank is actually empty it still reads that I’ve got plenty left. The Propane Gauge goes right onto the gas tank and hopefully, you know, works. Imagine that!

It’s pretty simple — the little doo-hicky screws right onto your gas tank and tells you, for real, how much gas you have left. The adapter is leak-proof (nobody likes propane explosions) and when you’re installing it, the positive seal mechanism prevents any gas flow until it’s securely connected. As a bonus feature, the gauge has a leak detector; every time you start your grill, you can know you’re grilling safely (unless it says that you’ve got a leak, if that happens, I’d stay away from it. :P)

The Propane Gauge is a simple gadget that does two things for you without using some fancy LED screen, a programmable timer, or a remote control. For some, that’s boring (myself included), but it looks like it actually works. And it’s only $25, so next time your in Brookstone, pick one up.

4 thoughts on “The propane gauge is boring, but it works”