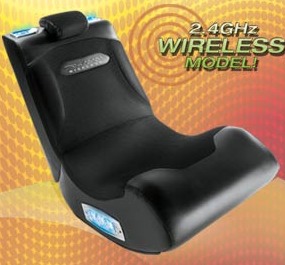 The seat itself looks a bit nicer. Instead of looking like a seat where your knees are pushed painfully towards your head, the seat actually looks, well, like a normal seat. Now onto the real features. You get a 2.4ghz transmitter that plugs right into your TV; that transmitter sends the audio, within 25 feet, to the seat. These are no Bose speakers, but they’re not crap. Two 12W speakers and a ARX 50W subwoofer which essentially acts as a rumble pack for the entire chair. Pretty much every console is supported — Xbox 360, PS2 and PS3, GameCube, DS, PSP. The Wii isn’t mentioned. . . huh. While the sound may be wireless, you won’t be 100% cordless yet. You’ll still need to plug the seat in to give some juice to those blue LEDs and the speakers. And still, one cord to an outlet is better than a 15 foot RCA cord running across the floor to the TV.

At $200, the Pyramat Wireless Sound Rocker is a bit pricey. Especially when you realize it’s a funky looking seat with a few LEDs and speakers. Maybe you should take that $200 and spend it on a few new games. Still, it looks cool, and wireless audio is cool, in a geeky sense.