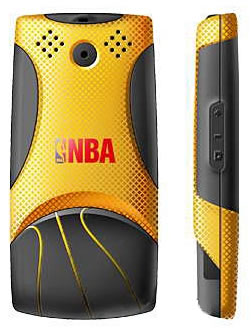 I’m a huge fan of NBA and Basketball, and if you’re anything like me, you’ll also be crazy about one of the most exciting sports ever played. Any true fan will be thrilled to know that National Basketball Association will release the NBA brand cellphone in China.

Now I’ve seen my share of thematic cellphones with entertainment characters from companies such as Disney, and cellphones inspired by cars like Hummer, but this is the first time I’ve seen one based on the NBA franchise. The phones will be launched in different colours and themes to appeal to the individual fans of the teams. This cellphone comes with a lot of games to choose from, and if you are very good at it, you can win prizes and gifts in the real world. There’s also a NBA schedule synchronization service, NBA themes, and the NBA theme song. Little details like the navigation buttons with a basketball style are sure to be a hit with basketball freaks.