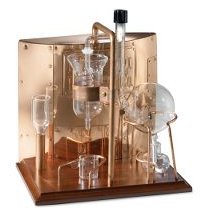 This looks like some sort of strange mad scientist design of a contraption which concocts a weird potion after putting in all sorts of exotic ingredients. Actually, it is known as the Missisipi Distiller that attempts to capture the original spirit (pun not intended) of the American south distilling heritage.

Designed in Barcelona, Spain, this finely crafted home distiller illustrates the nuances of English that are often lost in translation. The still’s copper frame is engraved with Missisipi Destil Co.–an honest, if poorly translated, attempt to pay homage to the distilling heritage of the American south. Destined to elicit questions from guests and encourage conversation, the distiller is reminiscent of those used to make brandy or extract essential oils from plants for use in perfumes. The alcohol burner, cucurbit, condensing pot, and collection cup are made from heat-resistant borosilicate glass–the same glass used in laboratory beakers. The distiller is mounted on a walnut base and its frame is made from five copper plates secured in place with copper rivets.

How much does it cost to bring this piece of memorabilia home? $199.95.