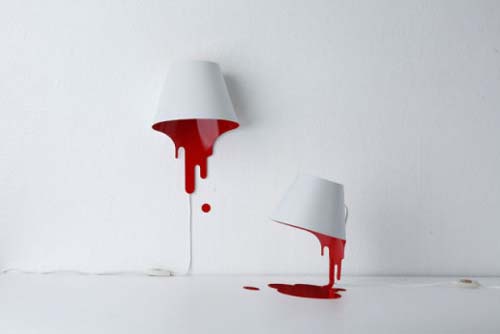 It’s rare that you get to have a lamp that is just a little creepy.  It manages to look chic, but it still looks like blood is oozing out of the lamp shade.  It’s possible the pooling blood thing was not the intention of the designer, they might have been thinking of red paint.  Especially since there is a version with a red lampshade and white liquid pouring out.  Which is far less interesting than the blood red leaking out.

Both lamps are being sold on Caina’s The Design Shop.  There is a wall mounted version, as well as a smaller desktop lamp.  I prefer the desk version myself, just because the appearance of an invisible stand adds a cool effect.  Each one of the lamps is handmade, so of course these are going to be a little pricey.  You can pick up the red version for 23,100 yen (about $262) and the white version for slightly cheaper at 19,950 yen (about $227).