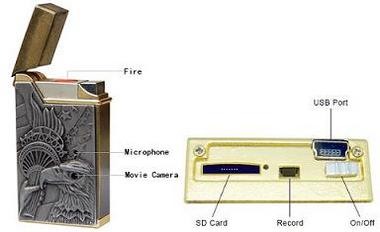 If you’ve ever had a wish to become a super secret spy, then you’ll need this lighter to help you capture all of those super secret spy moments.  Yes, I’m sure there are so many moments that come to mind, that you wish you’d have had a lighter with a hidden video camera and microphone.  Be it when your boss or spouse says to do something, then later claims they never said that or just when you know that the person’s words are going to come back and bite them in the rear.   You will be the one to capture it all and they’ll never know how.

The lighter not only has a camera that sees through the eagle’s eye and a built-in microphone, but the lighter itself works as well.  The lighter features a USB port to keep it charged and a microSD slot.  It also records 650 x 480 or QVGA in AVI format at 30 fps.  On the down side though, you can’t just rush off and purchase this.  They’re being sold online, but only in wholesale form.  If you would like to create an army of spies though, you can pick these up in bulk for $150 a piece.