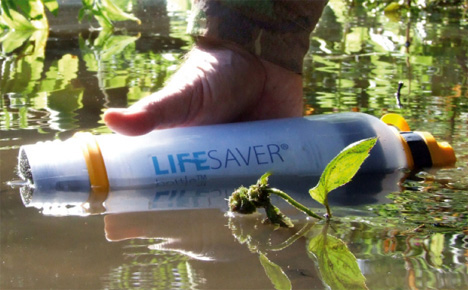 A few years back the Lifestraw was circulating the blogging sphere, actually, it crops up every so often even now.  However, not a lot of new details have come up about it.  It worked by placing the water into any pool of water you like and would suck it through the straw.  It instantly filtered.  However, that can be a bit obnoxious because if you want to carry the water with you, you need two different accessories.  This new design, the Lifesaver bottle both filters and holds the water.  Which would make it easier to toss in your backpack.

A bottle like this would rid the need of other methods of purifying water in areas when the water supply has become unsafe.  The design was made by Michael Pritchard who was inspired after Hurricane Katrina back in 2004.  He runs a water treatment plant in the UK and created this little filter which can purify 4,000 – 6,000 liters on a single filter.  Most filters only eliminate bacteria, however, this filter can also rid the water of viruses as well.  The bottle has already won an award for its revolutionary design, but it isn’t exactly cheap.  For a single bottle it is being sold for $460.