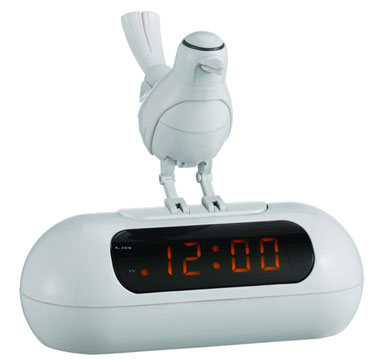 This isn’t the first alarm clock I’ve seen with a bird sitting on top.  It is however, the first one that could possibly be defined as chic and stylish.  The pretty bright white makes it so that although the bird sitting on top is a little whimsical, it would still fit within a home that conforms to most adult standards.  Not only that but you’d have the joy of waking up every morning to the sound of a chirping bird instead of that obnoxious beep.

Of course, I think I’d just stuff a pillow over my head thinking it was coming from outside, on mornings that I was more tired than usual.  If you’re not that hard to wake up though, it shouldn’t be difficult to comprehend that it’s an electronic bird that is chirping on your nightstand.  There aren’t a lot of details on the clock, but it does of course utilize LED lights for the clock part.  Then they also mention that the bird does move, but no word on how it does that.  You can pick up the bird for £20.00 or about $30 from Habitat.