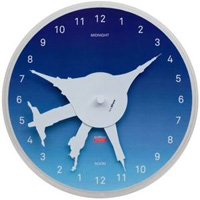 If you work in an industry which calls for keeping tabs on people in time zones other than your own local time, or maybe you just have friends who live around the world, it’s not always easy to keep tabs on each and every person. There have been various methods and applications which were made to keep track of multiple timezones on one gadget, but never one as visually appealing as the Landmark Clock.

The Landmark Clock is shipped pre-assembled with five major time zones, though it comes with 8 interchangeable pieces to change as you wish. The landmark hands available are for Paris, New York, San Francisco, Sydney, Shanghai, Tokyo, London and Rio, with a generic hour hand packaged in for every other time zone.

So while you might have friends located all over the world, you’ll never have a reason again to call them at an embarrassing hour just because you didn’t know the time of their location. The Landmark Clock is available for $75 CAD from Up To You Toronto!