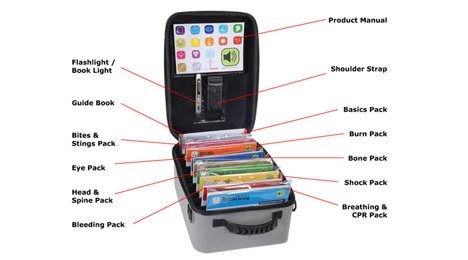 Anyone who has taken a normal First Aid class and gotten the certification knows that it is the most common sense class out there.  If someone is bleeding, put pressure on it, for shock cover them up and prop up their feet.  However, for those that haven’t taken one, there are a few random hints that are helpful.  It would also be great for a teen or kid who doesn’t know a lot about such things to have a device that helps with First Aid lying around.  It doesn’t just slap you with a booklet that you have to flip through for 15 minutes before you find what you need either.

It actually has step-by-step audio instructions.  It also has individually wrapped packets according to the ailment.  Such as the eye pack, bleeding pack, bites and stings, well you get the idea.  The site also sells replacement packs for when you use one.  All of the replacement packs are under $10.  The whole packet is being sold for $130.  For those that don’t want an electronic kit but like how it is organized the site also sells personal First Aid kits that range from $40-$83.