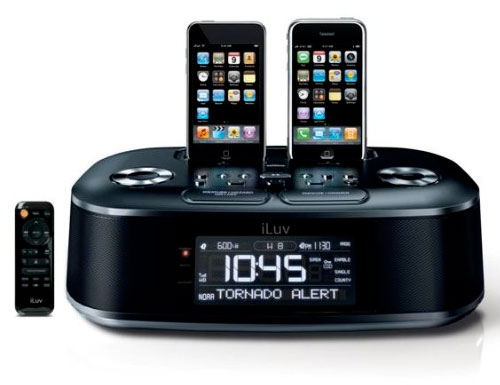 I have one of the later models of iLuv and so far have found it extremely convenient.  Especially since I tend to flake on charging my iPod.  Well now iLuv is offering a new gadget for us to drool over.  This one has found its way to this year’s CES and won’t be out for a few more months, but they at least released a  few details to draw in our interest.  The dock has all the usual convenient speccs but with one extra to sweeten the deal.  One great perk is that  iMM183 will work with both your iPhone and iPod at the same time.  That is as long as you have a 4th Gen or later iPod.

It features dual docks to help those of you that have both or a significant other with one as well.  The dock has the regular features like a built-in alarm clock and is able to play your iPod/iPhone through the built-in speakers.  It also has an FM radio and of course a way to plug in any other audio devices you have around.  It also has an extra feature to do with the weather this time around.  It has support for weather text alerts from NOAA and SAME that will automatically come through on the preset radio channels.  It allows you to archive as many as 10 notices for ongoing situations as well as has an LED warning to show when there is a new alert.  So far there is no price released, but it will be available in March.