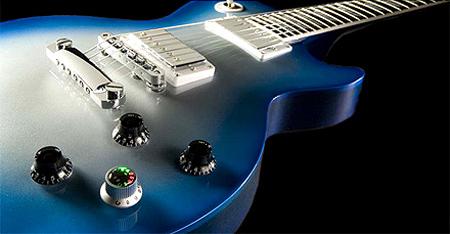 Some might call it the lazy man’s guitar, but every cover-playing guitarist will find it to be pure bliss. It will allow them to only carry one guitar with them instead of a set of differently-tuned instruments. Or, for those of us who couldn’t afford a set of guitars, it will practically eliminate the gaps between songs, used for re-tuning the instrument.

A limited first run is will be available in ‘Select stores’ (a whole bunch in the US, but only few in Europe and the other continents), on December 7th. It will only enter ‘series’ production in late 2008.

The first thing you’ll notice is the different color knob. If that knob is pulled, the robotic part of the guitar springs into action, and lots of little LEDs pop up.

Gibson have probably tried to simplify everything by using one knob to perform all the operations and to display all the information. That one knob is used for tuning, setting the intonation, tensioning strings, and displaying the remaining battery level. A little control panel on top or on the back would have been much more practical, but possibly too ugly for Gibson.

There are 6 tuning presets, which are by default the most used. Of course, one can customize each of them. After selecting one, all you have to do is strum the strings. The mechanics, fitted with servo motors, will then tune all the strings. Servo operation and tuning status is displayed on the Master Control Knob (MCK).

Intonation setting used to be a tedious trial-and-error process that lasted for some 15-20 minutes. Now, the onboard computer of this guitar tells you exactly how much you need to alter the setting of the intonation screw and in which direction. However, intonation corrections aren’t done frequently on any decent guitar.

A video says more than many many words. So here’s an official video demonstration. Afterwards, I’ll try to offer a musician’s view on what it actually brings, and there’ll be a little personal rant about it.

Now, for the personal comments:

First of all, this won’t make you a worse or a better player. Also, it’s going to cost an awful lot of money, I’m sure. The first run will surely go out mostly to Gibson collectors.

Then, as I’ve said before, a wee lil’ control panel would have done the job much better. And it could have been hidden on the side, back, or even as a sexy display under the surface. You’ve seen how tangled the controls are in the instruction video above.

Now, for a very personal rant: why, oh why, did they do a Les Paul? I’ll be eagerly awaiting a SG or Explorer before I’m even tempted to buy one. The color is gorgeous, the materials are the finest, but I really loathe that shape. Also, I really miss a whammy bar… This won’t be possible with Tune-o-Matic bridges or with this robot system, and I dare Gibson to prove me wrong.

All in all, it’s a great instrument, and really innovative. I usually play in one single tune, and I have a double-locking Floyd Rose mechanism. This means I only have to tune the guitar when I change the strings. But changing tunes in such a guitar is really tedious, so every time I played a cover in a different tune, I had to borrow another ax and tune it correspondingly.

Check out Gibson’s homepage for more details, availability, and of course eye candy.