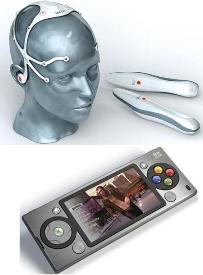 In case you are wondering what the next step is for video game consoles, a British magazine known as T3 has some idea of where the future is headed. I believe that these visions are simply ideas, and nothing that is presently under development by the big video game developers.

The first concept is a different type of remote for the Nintendo Wii. This type of Wiimote is still a stick, but it only has one button. It is apparently hooked up to some sort of headset accessory that uses brainwaves to control, and has in-ear headphones. Brainwave technology has been under development for a while now, and if Nintendo gets the first mind interface, they could seriously corner the video game market.

The second concept is a version of the Xbox that is completely portable. Not only is it a game player with 64 GB of memory, but it has built-in Zune capability and can even act as a mobile phone.

Now all I need is to know what Sony is planning for the future of the Playstation. So far, I can only see the number “4” in the future, but assuming that these concepts have some truth to them, Sony will have to come up with something very original in order to compete.