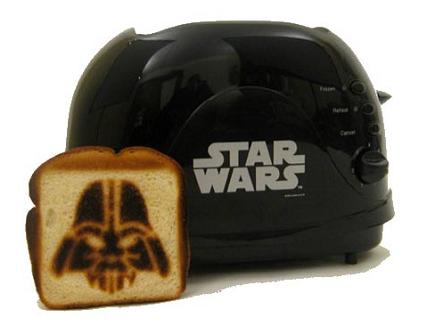 Plain white toast is not for everyone, frankly it’s just a bit boring. Now for all the Star Wars fans you can have Darth Vader toast. Even if you aren’t a fan of the dark side, I’m afraid Luke isn’t going to look nearly as cool on a piece of toast as Darth Vader does. However, Yoda would, but he doesn’t quite have the ominous look to him. So if you prefer your toast looking nice and evil this toaster is the way to go. There is also the Star Wars emblem on the side of the toaster, so that even if your friends aren’t making toast they will officially know how far your Star Wars addiction has gone.

It is just a toaster so beyond burning Vader onto your toast, it doesn’t really do anything interesting. You can adjust how dark it makes your toast but that’s about it. Sadly it’s not released just yet, you’ll have to wait for it to ship in January. Thankfully, you can pre-order yours to make sure you’re going to get one in the mail. You can pick it up for $54.99 at the Star Wars shop.