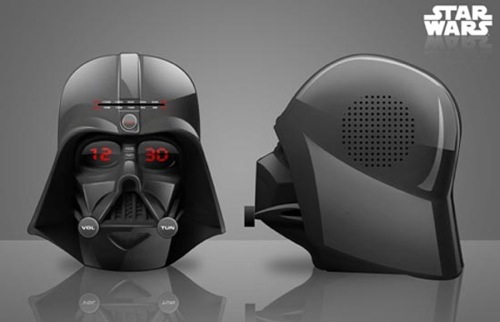 This Darth Vader clock was cool and all, but it’s not nearly as ominous as this new clock that will be coming out soon from Sakara.  Nothing will scare you out of the bed quite as quickly as turning over to find Darth Vader staring back at you.  It helps a bit that there are numbers that glow in his eyes, therefore it’s quite clear that this is a clock.  Hopefully you don’t get startled too badly and bash the clock to death with your toy lightsaber though.

If you did, then you’d have to pick up a new one and repeat the process.  It’d be a much more therapeutic way to make the beeping stop though.  Even if it would cost you $29.99 every single time you had to pick up a new one.  At least it isn’t horribly expensive.  The clock also includes an AM/FM radio and an audio jack input for MP3 players.  It also has the usual things such as a snooze button with the added addition of being able to choose between three different sound effects.  The alarm clock will eventually be posted on Sakar’s website, but so far it’s nowhere to be found.