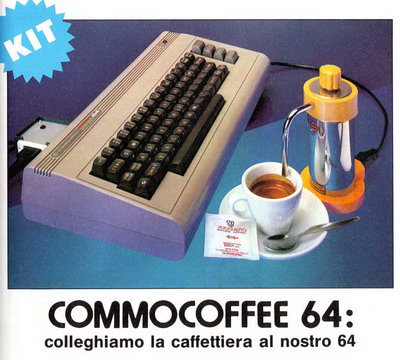 In 1983 for my 13th birthday I received my first computer – a Commodore Vic-20. It came with one game cartridge, I don’t remember the game however I do remember it was terrible. Included in the box was a book called “BASIC Language Reference” and soon I was writing my own games. It didn’t take long before the persistent “Out Of Memory” error prompted me to plead with my parents for an upgrade and the following year I received a Commodore-64.

In the middle 1980’s personal computers hadn’t quite found their niche and most people were still asking the question: “What do I do with it?” In an attempt to answer that question PC makers inundated us with a barrage of peripherals and add-ons hoping that one of them might be the thing that would make everyone want a personal computer. The Commocoffee-64, an espresso maker that is controlled by your C-64, is definitely one of the strangest.

Without the internet available to the public, computer stores teemed with strange devices to sense the temperature, wind speed and even biorhythms. It would follow that eventually companies would begin to run out of ideas. Perhaps this particular idea was hatched during one caffeine-fueled late-night research and development meeting. It isn’t clear exactly what purpose the computer serves in the espresso maker setup, but it sure looks neat. On the other hand I wouldn’t want to wake up in the morning all bleary-eyed and have to load some software from the infamous Commodore clamshell tape recorder which would take a minimum of five minutes if it even worked right the first time.

So maybe the computer as espresso machine is an idea who’s time has finally arrived. Only these days it had better be wireless and activated over the internet via its own website. That way when I am bleary-eyed in the morning all I would need to do is boot up my laptop, hope the wireless LAN is up and log in for coffee. Now that’s progress!