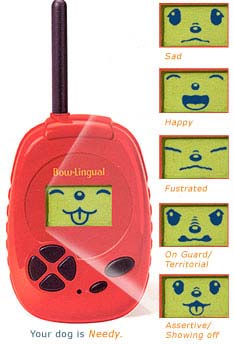 We thought that since this was “Take your pet to work week”, we would run a pet gadget by you, namely a dog bark translator, known as the “Bowlingual”.

The canine translator was developed in Japan (where else) from the voiceprints of 5000 samples of dog barks. The device was developed by Dr. Matsumi Suzuki, whom we’ve already featured for his work in trying to simulate the voice of the enigmatic Mona Lisa from an analysis of her bone structure.

By making a digital analysis of the library of canine barks, Dr. Suzuki established that the barks fell into 6 distinct patterns. By cross-referencing the 6 patterns with the body language of the dogs as determined by their owners, Dr Suzuki matched the 6 important types of bark with the following emotions:

Of course the bark of a snappy little Chihuahua is quite different from that of a Great Dane, say, but the gadget is pre-programmed with 200 different breeds of dog and a complete list is available from the Bowlingual website. The gadget can also work for cross breeds if you enter something approximating to your dog’s size and muzzle shape, but the translator doesn’t work so well for puppies though.

Its usage is simplicity itself. Once you’ve entered your dog’s details, attach the microphone transmitter to your pet’s collar and can read his or her barks from the LCD display. The gadget even advises suitable human responses to your pet’s barks.

I must say as a previous dog-owner myself, I always knew when he needed a pee or was being territorial, so I’m a bit sceptical about the need for such a gizmo. But at $50, it’s not too expensive and it could be a fun gadget.

3 thoughts on “The Bowlingual canine translator”