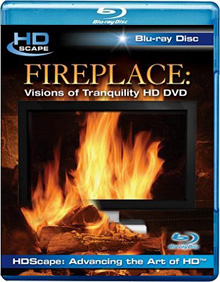 Some of you might remember the 1995 techno-thriller The Net. In the opening, Sandra Bullock’s character has a fire in her fireplace that is nothing more than a screensaver on a mid-nineties monitor. I felt the director had that shot to show how the main character’s life was made recluse by technology.

Ironically, there is a company that is selling this fake fireplace experience, but in a much better format: Blu-ray. All the user has to do is stick HDScape Fireplace: Visions of Tranquility in the Blu-ray slot, and he or she will enjoy a fireplace in high definition with a musical accompaniment like Beethoven’s Moonlight Sonata or, one of my personal favorites, Pachelbel’s Canon.

I suppose that this virtual fireplace is just one of many former DVD products that will be on Blu-ray. I suppose next will be those DVD fish tanks that offered an aquarium without all the maintenance. In the same manner, the virtual fireplace doesn’t require restocking with fresh wood or paper.

All that is missing is the heat. However, with all the home theater combinations (TV, stereo, and now Blu-ray players) out today, that should be enough to generate at least some warmth.

If you like the idea of Fireplace: Visions of Tranquility, feel free to go to the HDScape site and purchase it for a special price of $11.99.