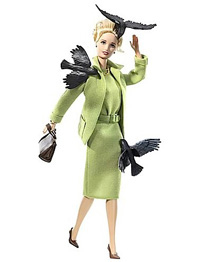 Alfred Hitchcock’s “The Birds” is widely regarded as one of the finest films ever to be witnessed on the big screen. Filled with almost unbearable suspense, the movie centers around a blond vixen who finds herself amidst a revolt of a murder of world-domineering birds. The bird’s start going batty, attacking children and damaging homes in tremendous numbers.

What could be a better way of honoring the film then portraying it through another piece of cultural treasure, the Barbie doll. “The Birds” Barbie Doll depicts our favorite girly toy being ambushed by a trio of blood-thirsty crows. Watch Barbie perform her best Melanie Daniels impression, sporting a lime green outfit, accessorized with a black leather hand bag.

This special edition Barbie doll is detailed right down to the disheveled hair style. Featuring what Entertainment Earth calls “real fake birds”, whatever that means, the dolls face depicts Barbie how we’ve never seen her (other than that one time when Ken came home drunk out of his mind.) Scared and confused out of her wits.

“The Birds” Barbie doll isn’t available quite yet, but Entertainment Earth claims it should be arriving in stock soon. To own your own piece of pop culture mashing, you’ll need to shell out $44.99 for this delightful doll. You Hitchcock and Barbie fans should be all over this one.