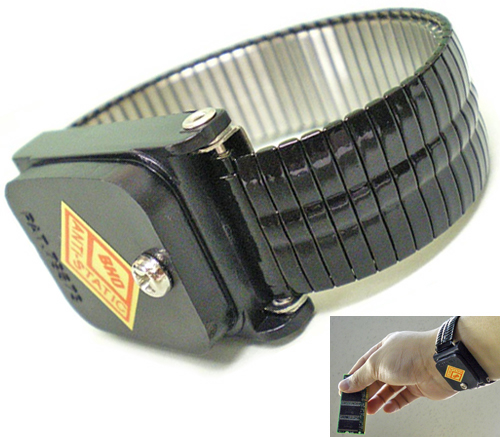 I have always been highly prone to getting shocked a lot in the winter.  I had one coat that accelerated it so badly I got a few shocks that about brought me to tears.  I had often considered picking up something like this, but all the ones I had seen you had to clip to something else.  Which would make it impossible to just wear around.  Well if you have a similar problem or you just want a wristband that allows for a lot more movement when you’re working on the inside of your computer, this new wristband would work great.

It’s a lot more stylish than the others that are typically used more frequently and you don’t have to be clipped to anything.   Although I’m not thrilled about the band type, that particular band is bound to rip several hairs out of your arm.  Unfortunately this isn’t a product that is available in the US or UK, at least not that I’ve come across just yet.  It’s being sold for 999 yen or about $11.