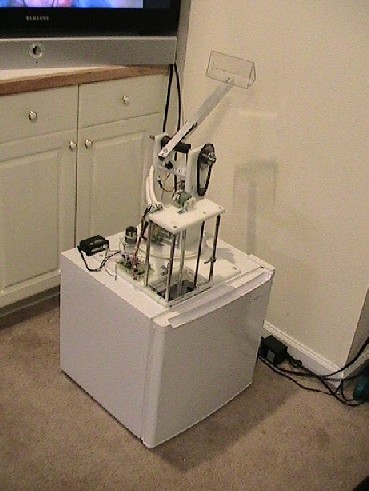 This is the perfect example of what student man can achieve when they have enough time, patience, money and love of beer; the beer launching fridge.

Invented and created by John W. Cornwell this is what he had to say about his amazing creation:

Have you ever gotten up off the couch to get a beer for the umpteenth time and thought, “What if instead of ME going to get the BEER, the BEER came to ME???” Well, that was how I first conceived of the beer launching fridge. About 3 months and several hundred dollars later I have a fully automated, remote controlled, catapulting, man-pit approved, beer launching mini-fridge. It holds 10 beers in its magazine with 14 more in reserve to store a full case. It is controlled by a keyless entry system. Pressing unlock will start the catapult rotating and when it is aiming at your target, pressing unlock again will stop it. Then the lock button can be pressed to launch a beer in the selected direction.


The Hole – video powered by Metacafe

More info (and other projects) on John’s site, found via Uber Review, thanks Vic.