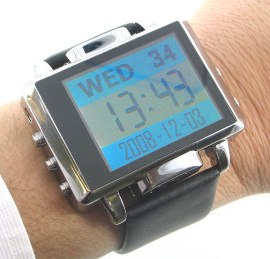 This isn’t the first time we have reported on Thanko devices, and if they keep putting out devices like an MP4 Watch with Video Camera, it won’t be the last. After all, a watch with a video camera feels like it was taken right out of James Bond or Dick Tracy.

This product is similar to an MP4 Watch that Brando launched a while ago, and the screen is the same size at 1.8 inches. Unlike the one from Brando, the Thanko can shoot video at 352×288, and is capable of shooting still photos at 640×480.

The Thanko MP4 watch also supports other types of digital formats including MP3, WPA, WMA, and can also display JPG files. I am assuming that everything can be downloaded via the mini USB port on the side.

You can’t help but like all the features in these kind of watches, but they always end up looking so thick. I had a chance to try out the MP4 watch from Brando, and it was like having a deck of cards strapped to my wrist. It appears that Thanko was not able to perfect their design.

I’m not certain why you would want a camera on a watch, except for covert operations. I believe that the lens is on the side, so if you are trying to film in secret, you will probably be a dead giveaway.

The Thanko MP4 watch has just been announced, but there is no word on a price or availability date.