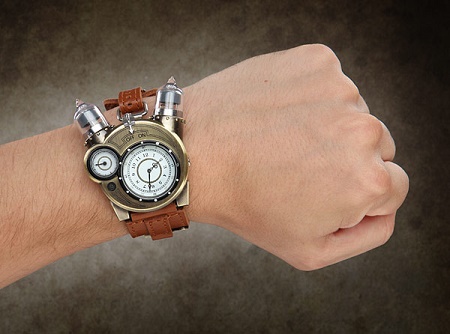 The steampunk movement has been around for quite some time. Seeing that there’s now a show out called “Steampunk’d”, it’s safe to say that this subculture has hit mainstream. We’ve been seeing the aesthetic pop up all over the place, and while some items are more than a few gears glued on to an existing product, it’s hard to find the good stuff among the rest. Not that gears glued onto a shirt or your face aren’t fanciful, but it’s nice to see them doing their job in a functional piece rather than just for show.

While time travel, Victorian aesthetics, and clocks seem to dominate the field, it’s hard to encompass all of that into your daily wear. If you want to show your steampunk affiliation without peacocking about too much, then a nifty nod like this Tesla Watch would likely be just enough…if not more than. This uses weathered brass for all of the metal, light-up vacuum tubes, and a leather strap to fit into the theme.

The vacuum tubes light up when you throw the switch into the “on” position, and there is an ornamental winding key for this analog watch. There is stainless steel and glass in its makeup, and you’ll need three different batteries to keep the minutes, seconds, and LEDs working as they should. This will fit a 6.75-8” wrist, and while you can likely get a custon strap for larger or smaller, it’s going to tack on a pretty penny to this $59.99 purchase. It is quite gaudy, but is certainly neat to look at.

Available for purchase on ThinkGeek