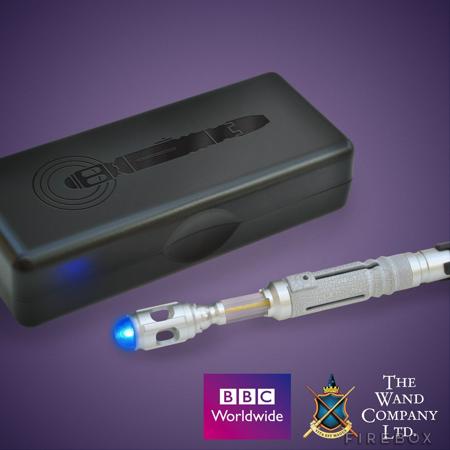 Fans of the Doctor Who series would definitely have watched the shows many times over, so much so that some of those who are more engrossed might actually go down the path of collectibles, which is fine if you are single, but often to the chagrin of your other half because “good money” is deemed to have been wasted on such collectibles. Perhaps you need to travel back in time so that you can find a spouse who is equally in love with the Doctor Who series as you, which is why you decided to pick up the £69.95 Tenth Doctor’s Sonic Screwdriver Universal Remote Control, no?

It does not matter what gadget you want to control, be it the TV, iPod, or other compatible devices, you can do so with multiple gestures. There is a quartet of modes in the Tenth Doctor’s Sonic Screwdriver Universal Remote Control that will allow you to become a fully-fledged Time Lord – in your own mind, at least. Built to a 1:1 scale, this is a true blue replica that does more than just sit pretty on a display shelf, where it was made by 3D scanning of David Tennant’s Tenth Sonic Screwdriver. Being an officially licensed collectible by BBC Worldwide, who knows, it might be worth something many years down the road. The universal remote control part of this collectible can be used with up to 39 remote control codes at any one time, now how about that?