Besides the fact that both products were suggested at the Coolest Gadgets forums, there is nothing else in common. But since I mentioned the CG forums you might want to register & join us (it just takes 1 minute) because there will be more contests there soon with cool gadgets ready for new owners!

I bet you have probably seen the telegasses in some futuristic movies, I’m not really sure but I think the name comes from a combination of television + sunglasses, at least that is what I think it means but feel free to make up your own conclusions.

The sunglasses have a little display placed on the left lens and when connected to a DVD player/digital camera/cellphone, they are able to project videos/pictures/text messages for your left eye.So, with only the left eye having the capability to see the projected image, it means that the right eye is free to do whatever you want like grab some popcorns or walking to the kitchen to get some soda.

But… this is old news – March 2005 – at that time it cost around $450 and was produced by Scalar, while visiting their website I checked that Teleglass 2 is coming soon which is cool to know. 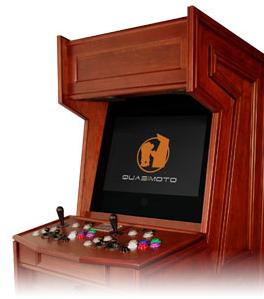 Quasimoto Interactive is a company that produces old-school arcades called Quasicades, which I believe to be a mix of Quasimoto + arcades. What makes them kind of unique is that they feature better specs than most of the normal arcades – a 27-inch Westinghouse LCD screen, 1000 games, 2.1 sound-system, etc.

There are different models but the one I liked the most was Quasicade FX, it’s made of wood and would probably look good on my living room, now I just need to find a way to get my hand on $4,500 to spend on this. Euromillions, here I come!