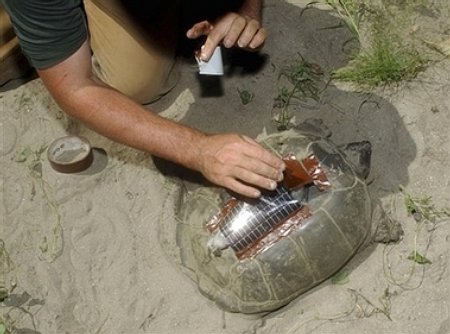 Scientists from the University of Massachusetts have used a combination of orthodontic cement and duct tape in order to keep a postcard-sized waterproof computer in place on a turtle’s shell, hoping that this along with a new wireless communication network will be able to help biologists track snapping turtles which are headed towards the path of being an endangered species. This new wireless communication network will consist of constantly moving devices that are capable of storing and recording information via transmitting data from one device to another, saving information to a central location while powered by self-charging batteries.

These batteries are charged by solar power, so it suits the snapping turtle (and other reptiles as well) perfectly since they need to spend a certain amount of time a day basking in the sun in order to warm up. In addition, the solar-powered computers tacked onto them are light enough that they don’t weigh the turtles down while coming in the way of their mating habits. Periodic readings of the turtles’ location and body temperature will be recorded, and when one of these computer toting reptiles are within a tenth of a mile of another, both their computers will exchange information.

The use of short-distance transmissions is essential in keeping the battery going for extended periods of time. This turtle-to-turtle relay culminates whenever one of them pass near a single base station that stores all the information, enabling biologists to know just exactly where each turtle is and what their habits are. This enables them to figure out their habits in the future which could come in handy when trying to save snapping turtles in the face of development. Guess what this wireless communication network will be called? It is definitely a no-brainer – TurtleNet. Looks like it has been launched just in time to keep tabs on them during their nesting season.