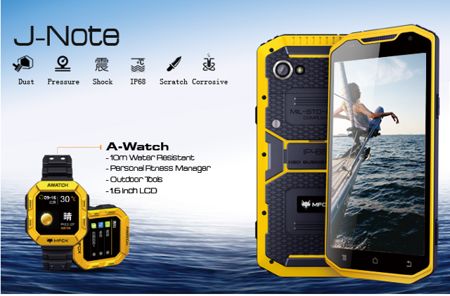 Many of us already own a smartphone, and it can be safely assumed that an accompanying device o go along with the smartphone is a tablet. After all, a tablet offers a far larger real screen estate for your eyes to feast upon, not to mention that it will also be able to let you watch movies in a greater level of comfort tan ever before. For those who would prefer to spend their screen time with something larger than that of a smartphone but smaller than a tablet, a phablet would straddle the line in between. However, some of us happen to lead lifestyles that are more “dangerous” for our sensitive gadgets, which is why there is a need for rugged devices to be up and about. It looks like TechFaith Wireless of China has filled this niche pretty well, having announced that it has recently commenced shipments of it ruggedized Android phablet into the European Union.

This rugged phablet from TechFaith is known as the JNOTE, where it has been designed on the robust Android 5.0 Lollipop operating system, as it runs on an octa-core CPU, and will play nice with LTE/WCDMA/GSM networks to make sure that you will be able to gain access to speedy Internet just about wherever you are. In terms of its ruggedness, it will boast of IP68 and MIL-S810G standards certifications.

Apart from that, 4G LTE ensures that the JNOTE will be able to enjoy fast mobile access, where it will be accompanied by an integrated 13 megapixel camera for professional quality video and still image photography. There are also other features that are part of the mix, where among them include a 6” LCD screen with 1080 x 1920 High Definition resolution that is protected by 3rd Generation Gorilla Glass, water resistance up to 1.5 meters, dust and shock resistance, dual sim card support and NFC to facilitate fieldwork. It might not be a beauty, but it remains strong under the most trying of circumstances.