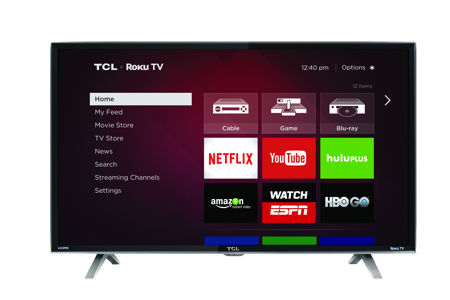 If there is one TV company that is growing fast in terms of branding over in the US, it would be TCL. In fact, TCL has just announced not one, not two or even three, but seven spanking new TCL Roku TVs that are set to hit store shelves some time later this month, over in brick and mortar stores as well as through online channels at major retailers nationwide. TCL is set to expand their 2015 TCL Roku TV lineup with a trio of 3800 Design Series models and a quartet of top-of-the-line 3850 Decorator Series models. This would mean that consumers are able to have a greater number of choices when it comes to hunting down a smart TV in order to meet their needs as well as placing TCL Roku TV in a prime position to be one of the leading smart TV experiences available at the moment.

All TCL Roku TV models, and this would include the 3800 and 3850 series, would have picked up the Netflix Recommended TV designation which points to the models delivering easy access to Internet TV services, faster performance, and new features that pave the way for a next-generation smart TV experience.

TCL Roku TVs will also boast of a personalized home screen, complete with access to all entertainment sources, so that it is a snap to navigate between gaming consoles, cable or satellite box. You will also be spoilt for choice since there are more than 2,000 streaming channels that include Sling TV and WatchESPN. Sling TV happens to be an Internet TV service which offers both domestic and international live and on demand programming from top sports, lifestyle, family and news networks such as ESPN, AMC, TNT, and Food Network, among others.