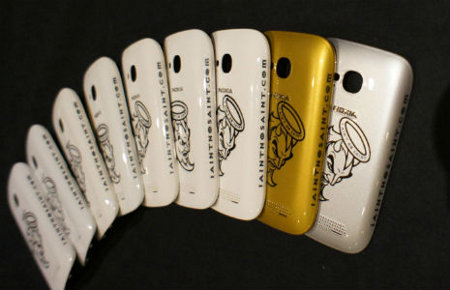 Are you thinking of getting inked? After all, celebrities do it, and so do sports icons – be they footballers, the star quarterbacks, professional wrestlers, or hoop shooters. Getting a tattoo has for some time already been the hip thing to do, but when it comes to the types of tattoo designs as well as choice of placement, well, I am quite sure that one is able to write an entire thesis with it and still not come to any concrete conclusion. Having said that, how many of us would think of tattooing our possessions, let alone a mobile phone?
Yes sir, we know that Apple allows one to engrave their iPods and iPads, but body artist Simon Templeman has come up with a rather novel idea – to be able to tattoo your favorite design onto the back of your smartphone. How is this done? Surely not with the traditional ink and needle that is meant to puncture human skin, right? For starters, he will be able to wield his magic using a special technique that was developed by him for the Nokia Lumia 710.

He managed to fine-tune a special air-brush, recreating the needle and ink effect of a tattoo – although this time around, his “canvas” comes in the form of a smartphone – a Nokia Lumia 710, to be exact. Simon says, “It’s a great way to make your phone stand out. Tattoos say a lot about people, so I thought it would be great for them to be able to put that individuality on their phone too.” This inspiration to tattoo handsets came about after Simon took a gander at the Nokia Lumia 710 alongside its bevy of interchangeable back panels.
Simon, currently 45, will rely on special lacquer layers in order to turn those designs on the phone as permanent fixtures. Not only that, he is not one to rest on his laurels, and hence has been looking into different ways of using a laser technique and burning an image on to the phone itself. At least Simon does not have to worry about his customers flinching at the sight of a needle, and neither does he have to fret about sterilizing needles before starting work on a new smartphone’s back. Just how much does Simon charge for his services? Prices start from £40 upwards, and just like any other ordinary tattoo, the price increases with the intricacy of the design.
Press Release