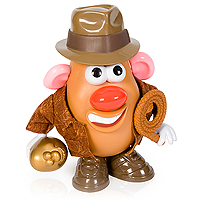 As well as his Indiana Jones gear, Mr Potato Head: Taters of the Lost Ark comes with non-heroic essentials such as shoes, ears, teeth and a mouth. And that’s just as well because he’ll need his faculties firmly in place when he’s fleeing from that big King Edward you keep rolling towards him. In fact, when it comes to creating ridiculous Raiders-style scenarios, the possibilities are endless. Why not chuck your spud in a pit filled with worms posing as snakes, or re-enact that famous Nepalese bar room brawl by adopting a comedy German accent, slipping on a leather trenchcoat and giving Mr Potato Head a good going over.

Tickle your child’s imagination today with this £14.95 gift.