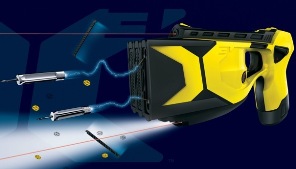 This is apparently what a Taser employee is supposed to say before he shoots three ladies. You can watch the video after the jump if you don’t believe me.

Introducing the Taser X3, a semi-automatic Taser. I have no idea if it is the first semi-automatic taser, but it is enough to shoot three shots without reloading, or recharging, or however you change the ammo in Tasers. I suppose this is for situations where one shot isn’t enough, like when you’re being pursued by a gang of criminals.

Looks pretty sweet, doesn’t it? It reminds me of a science fiction weapon like the guns in Aliens or that one multi-purpose gun in The Fifth Element, only without the net, bullets, freeze gas, flamethrower, and whatever else that it had.

I have no idea if the ladies in the video are Taser employees, but if they are, then they should demand a raise. I will have to admit that it plays with conventions as you normally see helpless women take out assailants with Tasers, not the opposite.

I don’t really have a price on this item, and in all honesty, I don’t know if you need a license to have a Taser. Maybe it could be something to be shown at the next Taser party.