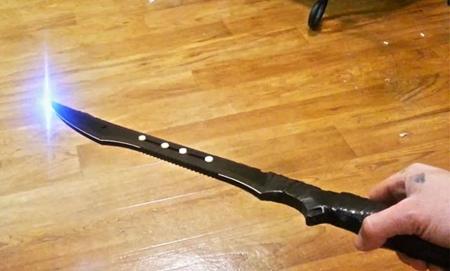 Which would you prefer to be on the receiving end of? The razor sharp edge of the sword, or being tased to the ground, having jolts of electricity course through your body as though you were wrecked by Force Lightning by Emperor Palpatine? Well, come to think of it, isn’t being hit by a lightsaber somewhat a similar feeling like the Electric Stun Sword? After all, it cuts through just about anything, and is made up of pure energy? The Electric Stun Sword is actually the brainchild of a certain YouTube user known as Jonathan, where he was experimenting with a double-bladed Shock Mod Ninja Sword in order to imbue it with Taser-like functionality. Sounds as though it is one of those science fiction weapons, but it is very, very real.

Needless to say, since this is a DIY project, it will obviously lack the finesse of a particular weapon that was fashioned out from the fires of Mount Doom. I digress, Jonathan obviously does not have the advantage of an actual weapons factory that churns out precisely tuned weapons, but at the very least, the sword’s practical function works as painful as its namesake. On the Electric Stun Sword lies a utilitarian but functional “On” switch which can be activated to turn on the shock function, and since stun guns run off a power source or battery, it will require a regular wall socket plug located at the end of the grip which was specially designed to charge the weapon.

According to Jonathan, he was inspired to come up with the Taser Sword after he saw another YouTube user by the name of GreekGadgetGuru. What is the whole point of this DIY project if it was not tested in the real world? Jonathan decided to play the role of guinea pig, and had a friend of his touch him with the sword, which should be demonstration enough to avoid one of these when unsheathed.

1 thought on “Electric Stun Sword is certainly one menacing weapon”