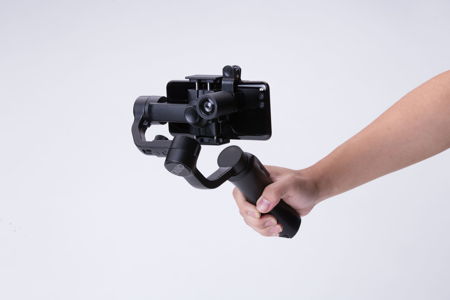 Taro might be another name for sweet potato, but we are referring to the manufacturer of hands-free tracking stabilizers for smartphones and DSLR cameras today. They have been in the business for quite some time, bringing together infrared technology as well as Artificial Intelligence (AI) so that their products are able to follow moving targets, and have launched the Taro T1 for smartphones, the Taro TX for DSLRs and the Taro M1 infrared tracking module recently. To sweeten the deal, Taro has decided to offer a pre-order pricing that is close to 50% that of what competing systems cost.

Taro’s secret when it comes to tracking lies in the special combination of a flickering sequential infrared tag as well as tracking module that carries an infrared camera. These will all work together in order to rapidly identify just which particular segment of the frame is integral to a dynamic action sequence. In other words, Taro is able to instantaneously establish the intended object’s approximate location, using its powerful learning algorithm to eliminate sub-optimal positioning on the spot, while precisely pinpointing the object’s exact location. Thus, users will always end up with the perfect balance between efficiency and accuracy.

The infrared tracking algorithm is extremely fast, being able to perform 30 calculations per second, which makes it possible for Taro’s devices to track objects moving as fast as 50 miles per hour. Among the features include auto-tracking, dynamic tracking (tracking that happens even when the cameraman is also moving), maximum stability (eliminates video jitter), stabilizer compatibility (transforming any existing Bluetooth stabilizer into an auto-tracking one), action sequencing (transforming a normal video into action sequence photo or videos), and auto-cut (which will detect and eliminate unwanted motion to ensure the captured footage is the best available one possible).

Delivery of Taro’s collection will happen later this April, and pre-orders are now open for the Taro T1 for smartphones, the Taro TX for DSLRs and the Taro M1 infrared tracking module for $199, $599 and $99, respectively.