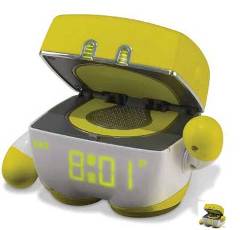 Sometimes it is difficult to get up in the morning, and if it wasn’t for my infant son, who cries in the morning at 7:00 A.M, I probably would never get out of bed. It appears that Hammer Schlemmer has found a way to create the technological equivalent of a screaming baby in the morning in the form of an alarm clock.

The Tantrum Throwing Alarm Clock will do exactly what its name entails. All you need to do is set it, and it will begin to tap its arms lightly when it goes off. Apparently, it will be sedated when you pat it on the head, which is the closest thing to a snooze button.

If you give it too many snoozes, the alarm will go into a full tantrum where it will flip open its maw like Mr. Mouth, a classic toy from the seventies. Anger isn’t the only emotion that it feels because if you pet the clock, it will apparently smile and even tap its wrists in appreciation.

Not only is this device do alarms, but it can do some fancy dancing if you connect your MP3 player. The Tantrum Alarm Clock runs on 4 AA batteries, and it has a warning light of flashing red lights in his eyes if the batteries are low. You can also plug in an AC cord if you want to for more power.

You should be able to purchase the Tantrum Alarm Clock for about $49.95 off the Hammacher Schlemmer website.