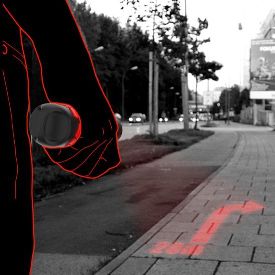 I have never used a GPS while walking, but if I did, I would want to use a Tamtam instead of a TomTom.

This is the Tamtam Flash from Designaffairs Studio, and it is designed to make it easy for the average pedestrian who is traveling on the sidewalk instead of on the highway.

As you can see, the Tamtam works as a flashlight which will enable it to work on any flash surface, such as this sidewalk. I can imagine that there must be some chip in it that makes certain that the arrow always points in the correct direction.

I have no idea how the user programs it. Perhaps the user has to connect the flashlight to a separate apparatus, or maybe the whole thing can be programmed right on the flashlight itself. Maybe it will have a touchscreen.

Of course, this is still in the concept phase for now. Why else do you think a silhouette is holding it in the picture. I’m not certain why they went with this shadow of a person rather than a real person, but it looks like the shadow is holding a Wiimote.

The plan is to make certain that this flashlight can create not only arrows, but scrollable maps on the wall. There is even plans to get the Tamtam Flash to read QR codes.