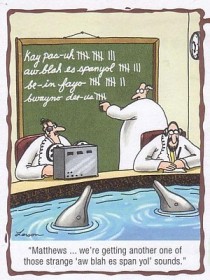 The moment I heard of this next device, I couldn’t help but think of this old Far Side cartoon. It would appear that an acoustics engineer John Reed has been working on a way to actually translate dolphin squeaks.

Apparently, the technology used to decipher dolphin chatter is the same as the tech we use to decipher Egyptian hieroglyphics. In all honesty, I didn’t know we had technology for that purpose.

The dolphin translator, called the Cymascope, has an odd set up. It uses a basin of water with a video camera, along with sand, brass plates, and a violin bow. When the dolphin sings, it records the input and analyzes it for common syntax patterns.

You want to know something hysterical? I was just watching an episode of American Dad where Stan Smith takes his son to work, and they meet some talking dolphins. Apparently, all dolphins want to talk about is mackerel. Let’s hope the dolphins will have a lot more to say than that.

I suppose that the “best case scenario” of this device is that the dolphins tell us things that we don’t already know. For example, that we are polluting the ocean and killing their primary source of food. Oh wait, I guess we already know that. Maybe we will listen now.

5 thoughts on “Talking to the Dolphins”