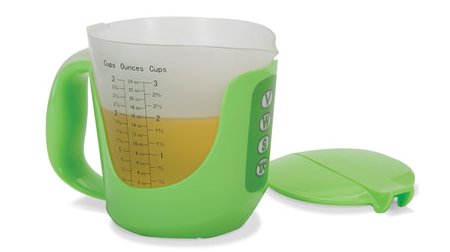 Now here is a rather novel idea that might just make you wish that things in the kitchen are a bit more modernized and digital, something like those kitchens that you see in science fiction movies which depict a far off future. Everything would be computerized by then, there would be no need for human waiters and cooks, and robots would do a perfectly fine job in serving customers. While we are not quite there yet in terms of technology, how about something a little bit closer to home and yet has a whiff of an optimistic future – the $59.95 Talking Measuring Cup.
The Talking Measuring Cup will be able to verbally announce the volume of wet or dry ingredients, doing away for the need to make an estimate by eye. Whenever you set it in its base, the cup will be able to state just the right amount that has been poured inside, and if you were looking out for a sexy and deep male voice, you would be sorely disappointed since a clear female voice would perform the readings. For instance, 1 1/4 cups is spoken as “one and one-fourth cups”, and you are able to take advantage of the tare function by adding multiple ingredients without emptying the cup.
Sporting a three-cup capacity cup that is made out of unbreakable frosted plastic, it will be accompanied by a removable flip-up lid, and is microwave and dishwasher safe so that it is a snap to use and clean up afterwards. Powered by a couple of AAA batteries, the Talking Measuring Cup makes for the perfect Christmas present for any foodie who loves to cook.