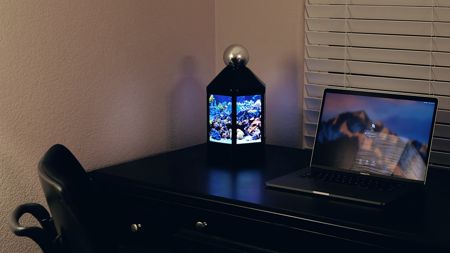 Now here is a particular device that not many homes will have, and it is all too easy to free up some space in order to place the Septaer from Taechyon. After all, a normal lamp or electric-powered lantern is nothing to shout about, but with the Septaer, you get a full wraparound 360-degree display as well as a full 360-degree camera built inside, sporting a design that is guaranteed to see people ask questions on where to get one.

In fact, Taechyon’s Septaer will no doubt be an eye-catching centerpiece when it comes to family and home entertainment. Specially designed to be viewed from just about any side courtesy of its omni-directional display technology, it comes accompanied by large high-end speakers while allowing space for users to control the room ambiance and environmental lighting depending to a user’s mood. To get on with the program that incorporates AI (Artificial Intelligence), Septaer will also boast of existing smart speaker AI capabilities of an Alexa, Google Home or Cortana.

Not only that, users can also take advantage of Septaer-to-Septaer full room video conferencing ability, use it as an entertainment device, as well as share user-created interactive characters and content. There is no word on pricing, but it seems that the first Septaer shipments are set to kick off by summer next year.

Steve Favis, CTO of Taechyon Robotics Corporation, shared, “Instead of everyone staring at a TV or phone screen, users will be facing each other when interacting with the Septaer instead of looking away from each other. Modern games can be played as the centerpiece of the table like traditional board games. Other flat-screen devices seem to pull attention away from family interaction. I am hoping families facing each other interacting with a single device viewable from all sides will bring families closer together.”