You’ve heard me whine and moan for a Mac tablet for a while now. 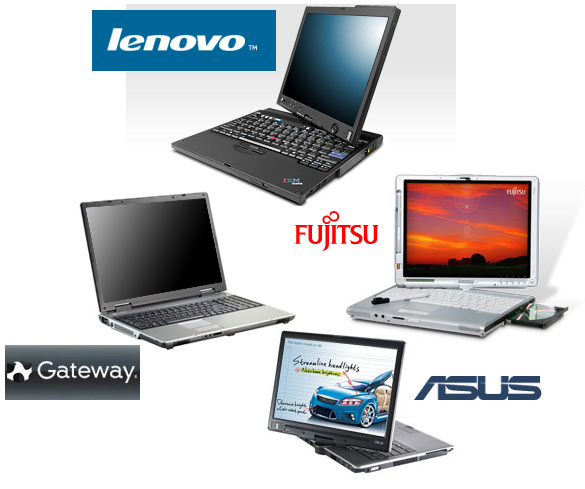 Well, I’m done. So far, they’ve not said a darn thing about doing it (umm ya do have more than half the graphic designer market, why not give them a way to enjoy drawing on the screen?)

Ok, I’ve vented, now on to business, there are two main questions I’m trying to settle before making the purchase, they are as follows:

2. Pick between these 4 machines

I’m sure you’ve already asked where’s the Toshiba? I’ve already ruled that one out, (or prove me wrong, and list why).

Here’s what I’m looking for:

integrated WiFi (at least to g)

I must admit, I originally wanted the Lenovo very badly, reliability, and durability were my original factors in this choice.

Then I saw that it lacks an integrated CD player, and to replace that functionality, well you’re looking at about$250 USD just to get a USB unit. Now I wouldn’t mind not having it there all the time, but when it has to be separate, well, what if I want to watch a movie while I’m sitting there? Plus loading new software (CD based) will require hardware changes just to get it in.

The Fujitsu, though heavier, has stayed the front runner for some time, the reviews seem the best, it includes a CD player (CDR and DVD-r) so that’s all there. The screen even rotates both ways, nice (many other units only rotate one direction, apparently this results in the removal of a number of screens in a bad way).

For the Asus, a bunch of people gushed over it,, then no one seemed to buy it,, confusing. I know that Alex Albrecht from Digg had one running Vista on it for a while and he tended to gush a bit about it, however, I don’t know what sort of things he was running on it, so I can’t really talk too much there (though I believe he codes and games, so it’s gotta be fairly weighty to get the job done).

For the Gateway, it’s biggest advantage is a larger screen, however it seems to lack in configurability, and to get integrated bluetooth and wifi the costs seem to oddly skyrocket. The online configurator is frankly too crazy, yet they do seem to offer the best in terms of graphics power with the option for an ATi Radeon with 64Mb. (then again my 2 year old desktop has 128Mb, so maybe I’m going about this measurement all wrong).

Here’s the load I’m going to place on it, (maybe this’ll help you, help me)

2. Photoshop for photo editing and drawing.

I’ll be patiently awaiting your opinion. At this point I’m going with the Fujitsu unless someone can prove me otherwise, (meanwhile, I’ll just sit here with a furrowed brow).