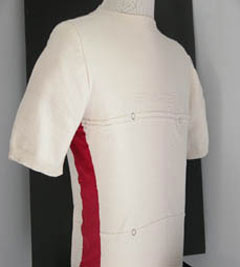 This is a cotton t-shirt with a difference. It has smart sensors inside the fabric that can monitor the wearer’s vital signals such as temperature, heart rate and whether or not they are moving.

The possible medical applications are infinite, but interestingly enough research work on the project was funded by the US military.

The cotton fabric used to make the t-shirt is woven with conductive fibres that are sensitive to the wearer’s motion and temperature.

A micro controller embedded in the t-shirt digitises the signals and transmits them via a wireless connection to a remote back-end system for real-time monitoring. The technology used in the t-shirt took 5 years to develop and was funded in its early years by the Department of Defense, presumably because of the huge costs involved. 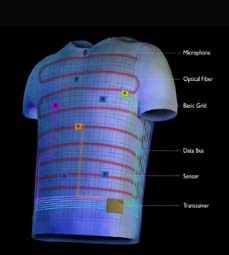 Medical applications of the t-shirt include the monitoring of outpatients with chronic illnesses, elderly patients, and perhaps babies judged to be at risk from SIDS or sudden infant death syndrome.

Other applications might include the monitoring of emergency service workers such as police officers and fire service workers, and field testing will start later this year.

There’s no price tag available for the t-shirt, but you’ll be happy to know that they are washable – though I doubt very much if you can iron them though!