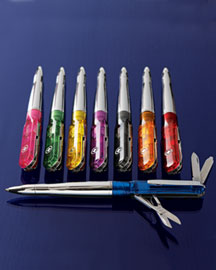 Swiss Army do make some pretty cool looking pen knives but generally they don’t look (or function) anything like a pen… until now that is, with the Swiss Army Spectrum Series Ballpoint Pens.

The Spectrum series look and function like regular ball point pens but as with all things Swiss Army they come with an array of fold away blades and tools. Tools include

Swiss Army Ballpoint Pens are available from Neiman Marcus for $50 which is pretty cheap for stuff from Neiman.