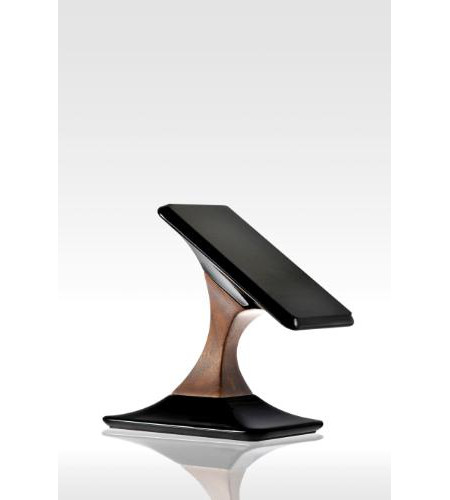 Kickstarter is a great place to raise funds from the masses if you do happen to have something that most of the people would like to have, but did not think of it just yet. We have seen our fair share of wireless chargers in the past, but this particular one that has hit Kickstarter hails from Lutman Design Studio, arriving in the form of Swich, which is a wireless charger that functions as a stand for smartphones, being designed in wood and ceramics. It is a snap to use, looks great as a fashionable mobile appliance, and will also do its bit to assist users so that they can charge up their dog tired battery and access phone apps in a wholly new way.

The Swich claims that no other chargers out there in the market is capable of matching its organic design, where the wooden and ceramic structure happens to be inspired by minimalism and presented in a perfect round shape. The form itself will “push” the phone up to float that is slightly above the desk, making it look like that of a surfer that rides a wave. The whole idea of Swich was to ensure that it looked as organic as possible, and would definitely arrive in a shape that complements any office or home décor style.

The classic Swich stand will boast of fine ceramics and American walnut, and the charging stand itself functions as an allusion to tradition and resilience. This mobile accessory would ensure that your smartphone remains looking classy and timeless on its charging stand, which points to a historic background of materials while boasting an inspiring form.

Swich also comes with a special, brand new function, where it has been specially designed to adapt to screen rotation needs. For instance, the head of the stand is capable of rotating along with the phone in order to turn the screen in the preferred position. The device can also be placed vertically or horizontally, where one can then switch the position at any time with a simple turn. Hopefully this is one idea that will kick off for good.