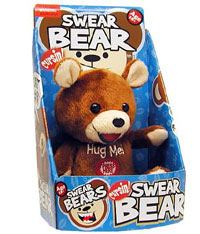 The holiday season is slowly but surely creeping up on us, bringing the whole country to a frenzied shopping rush due to the wonders of procrastination. Children all over the world will be clamoring for Sony PlayStation 3s, Nintendo Wiis, Xbox 360s, the Tickle-Me Elmo 10th Anniversary Edition, and all things soft and plush. Hopefully, panicking parents (after seeing the long queues at the checkout counter) will not pick up the Swear Bear plush toy without even reading what it does just to get out of a maniacal shopping environment as soon as possible.

This plush toy clearly comes with a warning that it is meant for those who are 18 years old and above only on the top right hand corner of the box. It might look extremely docile and cute, but boy will you be surprised to know that it can pump out swear words that would even give foul-mouthed Cartman of South Park fame a run for his money. Instead of spewing out lovely messages, this twisted cousin of the Care Bear we all grew up on has suffered from an error in chip design, hence enabling him to churn out various profanities such as “Eat sh*t and die”, which is one of the tamer phrases to come out from him. Other phrases are unprintable as this is a family oriented site, but you get the idea.

The Swear Bear comes with an attitude that definitely makes him unsuitable for children, but it is good for a laugh or two among adults, especially those who were weaned on Hollywood movies that require the mandatory cuss in order to bring in the big bucks. You can pick up one today for $19.99. The Swear Bear has been around for quite a while, but its staying power on store shelves proves its popularity.