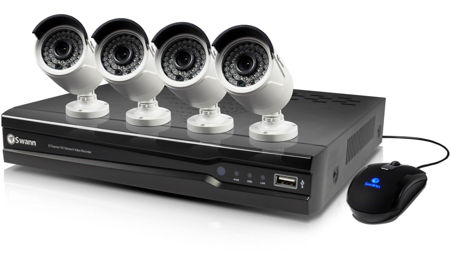 You might have a house, or even a mansion, but do you have a home in there? This is a question that is worth asking, of course, where each of us will have to learn to take stock of our situation and figure out where we are in life, and what we would like to do about it. Of course, there are other tools around that will help us gain that peace of mind, and Swann happens to provide one of them in the form of its Professional HD Security System. Surveillance cameras and security systems have been useful all this while for keeping track of and tabs on things, but Swann would bring such surveillance ideals up to a whole new level with the Professional HD Security System, as it is perfect for indoor and outdoor monitoring of large areas, including yards and driveways. The system itself will boast of a quartet of weatherproof, 3 megapixel, full HD cameras in addition to an eight-channel network video recorder.

With an asking price of $949.99 a pop, the Swann Professional HD Security System was designed to defend your property and deter crime, where all four of the aluminum cameras will feature a night vision distance of up to 100 feet, as well as a built-in microphone with an audio range of up to 16 feet. Users are able to easily locate incident video with important details such as license plates, faces, clothing colors and more, then transfer it to an external storage through the accessible USB port or their network.

Other featurs include live viewing and playback on smartphones and tablets thanks to the free SwannView Link app for iOS and Android, in addition to on an HDTV through an HDMI or VGA connection to an LCD screen. One is also able to configure the network video recorder in order to have it send email alerts with an attached JPEG image of any recorded activity, so that you can continue on your holiday with full of peace. Under certain conditions, you can have the system record up to 24 days of footage, while five days of footage is the default, and even longer with motion triggered recording.