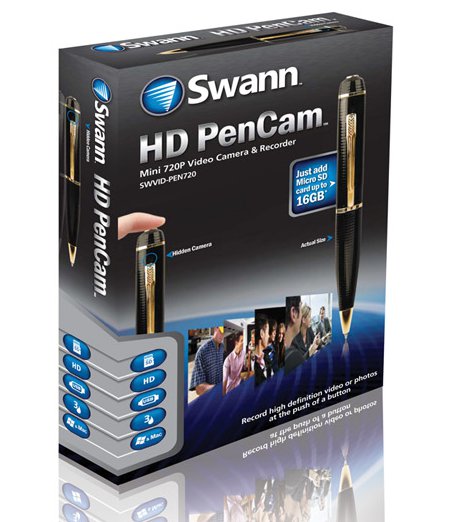 These days, many of us carry at least one video recording device – the smartphone, and whether we use that or not is another matter altogether, as different smartphones have varying hardware crammed inside that will affect the output quality. As for the tablet, the same principle applies, and holding a tablet is far more unwieldy compared to having a smartphone nestled in your palm comfortably. Well, either way, they are not exactly the most discreet method of getting things done, which is why Swann came up with the HD PenCam and PenCam 4GB.
Yes sir, these two devices conceal a miniature video camera and DVR within what looks like, and works like an actual pen. Yes sir, this means you can still get your John Hancock down when the situation calls for it, and also capture a recording of your married colleague flirting with the office secretary as a form of blackmail, so much so that he has to bring you donuts and coffee every morning to keep his dirty secret safe. Let us take a look at what the HD PenCam and PenCam 4GB are able to offer in closer detail right after the jump.

First of all, the HD PenCam is able to shoot high definition AVI videos at 1280 x 720 resolution in addition to spiffy JPEG images, while the PenCam 4GB does both high resolution videos and images as well. What separates the two is this – the PenCam 4GB comes with a static internal memory count, so you are limited to just 4GB of storage space (which is the highest capacity for a PenCam to date), while the HD PenCam comes with a microSD memory card slot, so that you can record videos and shoot photos as long as there is still space left on the 16GB microSD memory card.
Either way, the videos recorded and photos shot can be shared on sites like Facebook and Youtube without the need for any post-processing, and they will play nice with PCs and Macs. Date and time-stamping makes the authenticity of the videos and photos unquestionable, and they can be charged up via USB – the same way that data is transferred over to the computer as well. Interested? The Swann HD PenCam and PenCam 4GB will retail for $99.99 and $69.99, respectively.
Press Release