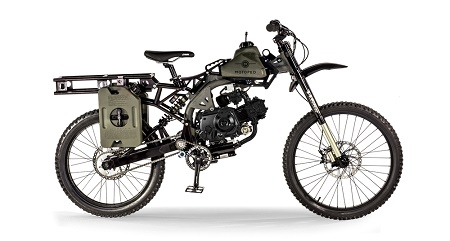 We’ve all wondered what would happen if zombies were to plague the Earth. There would be absolute chaos, and it would be a constant struggle to stay alive. Not only would we need to get back to the basics of being able to hunt and learn the layout of the land, but we would need transportation faster than walking. There’s not really going to be a lot of gasoline left in available, so if you must use something that runs off of fossil fuel, you’ll want to make sure it can last on a little.

The Survival Bike would be perfect in a world full of the walking dead, but it wouldn’t be too shabby in the world of the living either. This is a motorized bicycle that can take you 400 to 500 miles without needing to stop for more. There is a primary tank, and two side-mounted one gallon tanks that make this possible. There’s a rear rack capable of holding 50 pounds, on which you could always mount another tank if you’re looking for distance more than the ability to carry your belongings.

The entire bike weighs 132 pounds on its own, but can be loaded down with a myriad of supplies on the universal rack. This is not a vehicle that you would use to take you to work everyday (or maybe it is). This rugged bike is going to set you back $2,499, which means you’ll want to make sure you’ll get proper use out of it before dropping that much money.

Available for purchase on Motoped